I set off for my first ever gravel rally with the skid legend himself, Mark Parsons, in his Truimph TR7 V8. We arrived at Manukau for documentation and the ceremonial start, which includes a drive over the ramp short interview and a pre rally catch up with the other competitors.

We were lucky to be able to use one of the apartments at Hampton Downs as our rally base, so we woke up on Saturday morning ready to go with the car having its final check over the night before. So we belted up and headed to our first control. Rallies are run on a very tight time schedule you have to be in the right place at the right time, there is only a 1 minute leeway. Off we set to our first special stage Te Akau North. Off we went. Flat out on gravel is quite the experience, it’s amazing how the grip and turn comes in at just the right time, although I do think that the driver has quite a bit to do with that. It was a very wet stage with some heavy rain the day before. We came flying around a corner and then saw a safety triangle. These normally are put there by competitors that haven’t managed to stick to the road to let you know that they are there. This one was to let us know that a branch of the Waikato river have taken over the road, slowly through the first one, then we see Dave Strong’s Fiesta stuck in the middle of the next one. His engine took in a lung fill of water and seized. Around the Fiesta we went and then into the next one, in hindsight slightly too fast, and with a splutter our engine stopped also. Ours was luckily an electronic problem. With the water lapping at the bottom of the door, out we got to push the car out and try to get it restarted. I didn’t think swimming was part of rallying. With the TR7 finally out off the water and with some time to dry out it fired up into life again. Quickly we jumped back into the car, belted up and away we went, with Mark trying to make up the 7 minutes we have lost.

The next stage went well but we had started to develop what we initially thought was an exhaust leak, so we continued on to the next stage and then on to the service at Hampton Downs, with our ‘exhaust leak’ getting worse. When we arrived at Hampton Downs it was obvious to our service crew outside the car that this was not an exhaust leak but another more serious problem. So we temporarily withdrew from the event and got the car up to the apartment where we could diagnosis it better. Luckily we had Tim from Bygone Autos as part of our service crew and also Russ that is ex Bygone Autos turned up. The boys had the head off in about 1 hour to reveal a blown head gasket. With a few phone calls and a trip back to Auckland to get the parts required we were confident that we were going to be ready for the following day, so we re-joined the rally and Tim and Russ worked hard and got the TR7 back on 8. Thank you to them, otherwise it would have been a short weekend.

With the car ready for Sunday morning we headed off to the famous WRC stages of Te Hutewai and Whaanga Coast. After the first stage we could relax as the car seemed to be going as good as it should. It was on these stages that we were able to wind the V8 up doing 180kph on gravel is f*#@en good. Mark is extremely skilled at throwing the car around and the crowd loved it. With Mark never wanting to ‘waste a crowd’ he was trying hard on one corner but oopps trying too hard, crowd wasted, not as spectacular as he would have liked. Luckily we were able to do the stage again and redeem himself he did, the spectators couldn’t get enough of his car and the V8 noise. Second to last stage we hit a rock and punctured the tyre, with only 10 km’s to go we decided to keep going and continue racing. This made every right hand bend interesting but Mark being Mark overcame any under steer with more right foot. Only at one point did that almost not work for us, we almost ended up down a bank but once again amazed at how the grip comes in at just the right time. We made it to the end of the stage with the tyre getting worse and worse, we then decided to tour to the service and make it the service crews problem, but with about 2 km’s to go the tyre decided to let go completed and forced us to change it on the side of the road. We made it back to service within the time allowed. With us fuelled and tyres changed we headed back to Hampton for the final stage of the day. Mark wanted to put on a show for the final stage and a show he did put on. We got a little carried away and did a couple more laps than we were supposed to and finished with a couple of donuts. The crowd loved it, the officials not so much. But it was worth it, with the rear tyres through to the canvas the rally was over. Thanks to everyone that helped out and also to Mark, a ride of a life time, I’ll be back as soon as I can –  that’s too good to only do once in a lifetime. 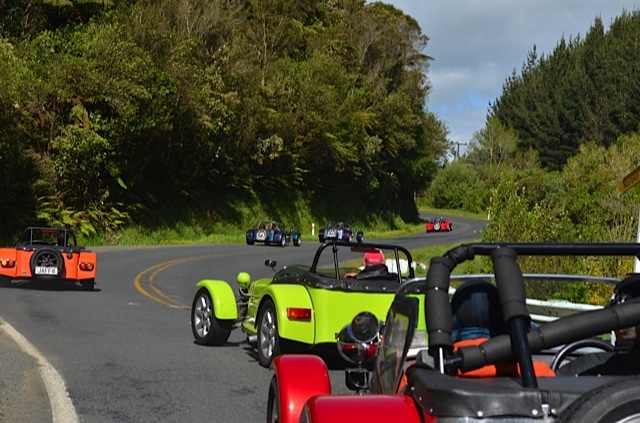